Pets
Article by Lady Thomasina Coke
Meringues ready to be baked.
In 1630, a recipe for a baked beaten-egg-white-and-sugar confection is given in a
manuscript of collected recipes written, by Lady Rachel Fane (1612/13 – 1680). At
that time, Lady Fane was single, eighteen and living in West Kent at Knole, one of the
largest private houses in England, and, since 1566, the home of Thomas Sackville, 1st
Earl of Dorset, and his descendants who have lived there ever since. The recipe by
Lady Fane appears to be the second earliest recorded recipe of a baked beaten-eggwhite-and-sugar
confection. It is reproduced here in the figure below with the kind
permission of the Centre for Kentish Studies in Maidstone, Kent, U.K.,
A facsimile reproduction of Lady Fane’s recipe for meringue
Where it is archived. An annotated transcription of the recipe follows the figure.
“To make Pets
Take a pownd of Drye fine searsed [sifted] suger, & beat the whites very wel then
take off froutgh [froth] & put your suger, bye litle & litle in to it — contineually stiring
it & beating it with a spoone ore laydle, and when it is exceedingly well beaten, then
have some pye plates ready buttred & wipe the buter of because the lesse buter it
hath the beter, then drope them upon the plate & put in to every drope a carieway
seede or coriander then let your oven be very temparate and watch them with a
candle all the while & if they be right they will rise and looke very white, it is good at
the first to set a scilet [skillet] of water, with them in to the oven,& when they be
thowrow [thoroughly] drye then take them out, you must in the mixing of them put
12 graines of muske & 12 of Abergrisse [Ambergris] which you must bruse with suger
before you stire it in to the egge & suger.”
Redacted recipe
Ingredients
6 egg whites
225 g caster sugar
25 g butter
1 teaspoon lightly crushed coriander seeds
1 teaspoon lightly crushed aniseeds
Method
Beat the egg whites until they are really stiff and then add all but 2 tablespoons of
the sugar, a spoonful at a time beating as you go until the meringue is glossy.
Mix the coriander and aniseed with the remaining sugar, crushing it gently, and fold
it carefully into the meringue mixture.
Take a couple of baking sheets and lightly butter them or cover with baking paper.
Place a tablespoon of mixture on to the surface or pipe, leaving at least an inch
around each one for spreading.
Bake in a low preheated oven, 140 degrees, for 1 to 1 ½ hours. They’re really meant
to dry out rather than bake and should remain white throughout. Allow to cool
before lifting off.
They will store in an air tight container for 3-4 days.
Source-Old English Recipes by Michael Barry (Jarrod Pub., 1995) (p. 64 – 65).
http://www.inmamaskitchen.com/FOOD_IS_ART/meringue2.html 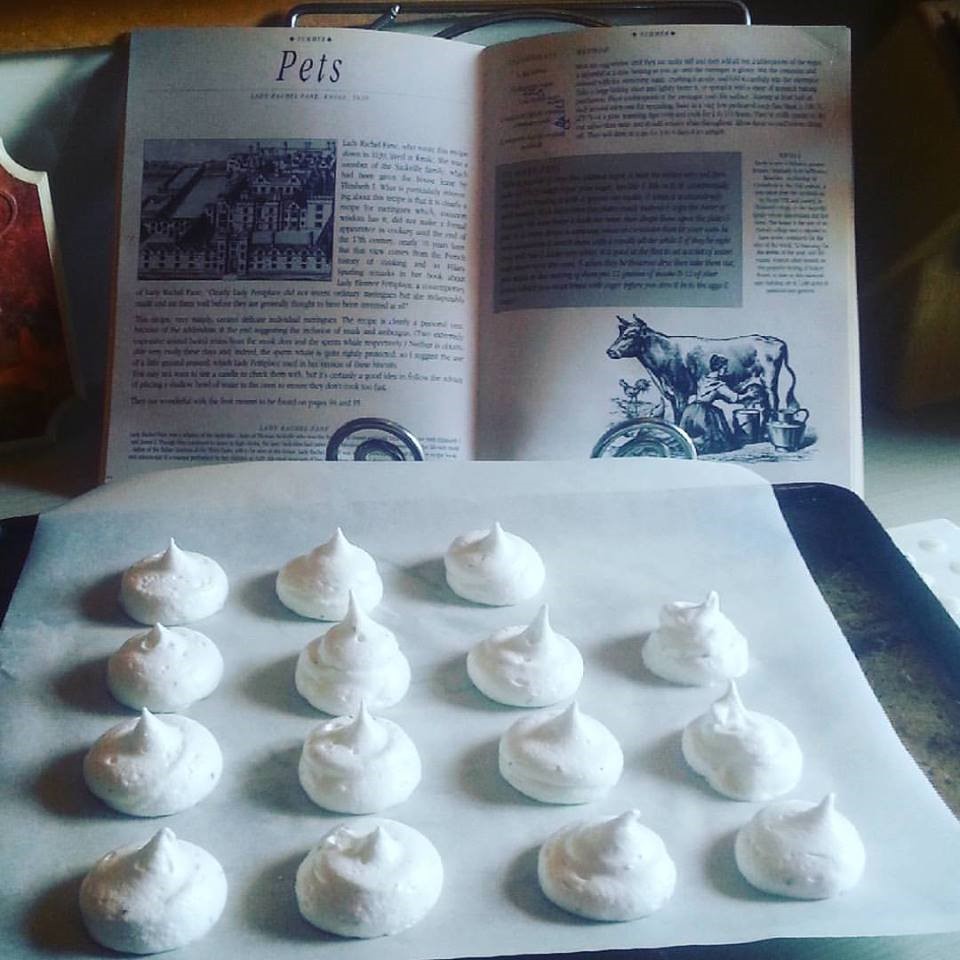 This recipe is from-
Flans and Wine: A Benedictine recipe book from Eversham Abbey
By Brother William of Berneslei
Translated by David Snowden.
½ cup of butter, softened
½ cup of sugar
2 tbsp of rosewater
2½ cups of plain flour
½ tsp of nutmeg
½ tsp of salt

Cream butter and sugar. Add the rosewater and blend thoroughly. Sift together two cups of the flour, nutmeg, and salt, stir into the butter unril the dough holds together. With your hands, gently knead in enough of the additional flour to make a smooth ball of soft dough. Roll out on a floured board to the thickness of ½ inch. Cut large rounds with a glass or pastry cutter. Placed rounds on a greased sheet or one lined with parchment paper and bake in a 300F oven for about 15 minutes, or just until done; they must be white, not brown. Remove the cakes to a rack to cool. You should have enough dough to make 20-25 cakes.

This is the recipe directly from the book.

A couple of notes I have from cooking these;

You will not need too much of the additional flour to make a soft ball.

I used a 6cm biscuit cutter as I didn’t know what the recipe called “large” this only made about 16 biscuits from the above mix.

And lastly, they taste much better and have a better mouth feel 24 hours after baking.
I found they were nice tasting, but a bit gluggy in the mouth, when I tried them just cooled. But the following night at the feast, they had a much smoother feel in the mouth and were not gluggy at all

Springerle (SPRING-uhr-lee) – These have been and still are traditional Christmas cookies in Bavaria and Austria for centuries. Springerle are white, anise-flavoured cookies, made from simple egg-flour-sugar dough. Usually rectangular or circular in shape, they have a picture or design stamped on the top. The images are imprinted with specially carved rolling pins or flat molds (Springerle presses, or boards). After the cookies are baked, the designs are sometimes enhanced with edible food colours–or with tempera or acrylic paints, if the cookies are to be used as decorations. Hartshorn is the traditional leavening (it is an ammonia compound).
History:   The name Springerle comes from an old German dialect and means “little knight” or “jumping horse.” Historians trace these cookies back to the Julfest, a midwinter celebration of pagan Germanic tribes. Julfest ceremonies included the sacrificing of animals to the gods, in hope that such offerings would bring a mild winter and an early spring. Poor people who could not afford to kill any of their animals gave token sacrifices in the form of animal-shaped breads and cookies. Vestiges of these pagan practices survive in the baking of shaped-and-stamped German Christmas cookies such as Lebkuchen, Spekulatius, Frankfurter Brenten, and Springerle.

Take 1 pound flour and pass it through a fine sieve and place it overnight in the oven hole (to keep it warm). Take a pound of dry sugar and 4 eggs, but big ones, 2 spoons cleaned anise (if you want good ones then roast the anise first). Then 2 tablespoons aged Baseler cherry schnapps (helps to get rid of the egg taste and helps the dough rise). Let the oldest boy mix the sugar eggs and anise. Then the second oldest, then the third, altogether at least 1/2 hour. Then add the schnapps, mix the flour, and knead the dough until it stays together. Roll the dough out, but not too thin, and carefully press, but with enough pressure the mold into it. Afterwards store on flour dusted board for 24 hours, in a warm place. Then bake with low heat. To get them nice and white, before baking, dust some flour on them and then blow it away. If you don’t get feet (a bottom layer) in your springerle, then the boys or the house girl will scold you: “It was badly stirred, or there was a draught in the room.” Springerle without feet are a nuisance.

The stamp I currently use is a silicone cookie stamp from a pack that I purchased from the ‘Stampin Up’ , a scrapbooking supply/party plan company. I use a round cutter to cut the cookies.

The recipe that I use is from a booklet called ‘Memories from Germany’-a selection of recipes. It is a publication of the Embassy of the Federal Republic of Germany. Printed by Paragon Printers, Canberra, A.C.T. Australia. ISBN 0 7316 7272 0

Finely grated rind of one lemon

Beat eggs and sugar together till thick and pale in colour. Add rum, rind and sifted flour. Roll out portions of dough about 1cm thick, a little extra flour may be needed as dough can be sticky. Then press in to floured Springerle moulds, use a Springerle rolling pin and/or cut into shapes.

Butter or line a baking sheet with baking paper and sprinkle with anise seeds. Place biscuits on the sheets and let dry overnight.

Preheat oven at 150 degrees centigrade, bake for 30 minutes. Springerle should stay white or at least be very pale. Let cool before storing in an airtight container. 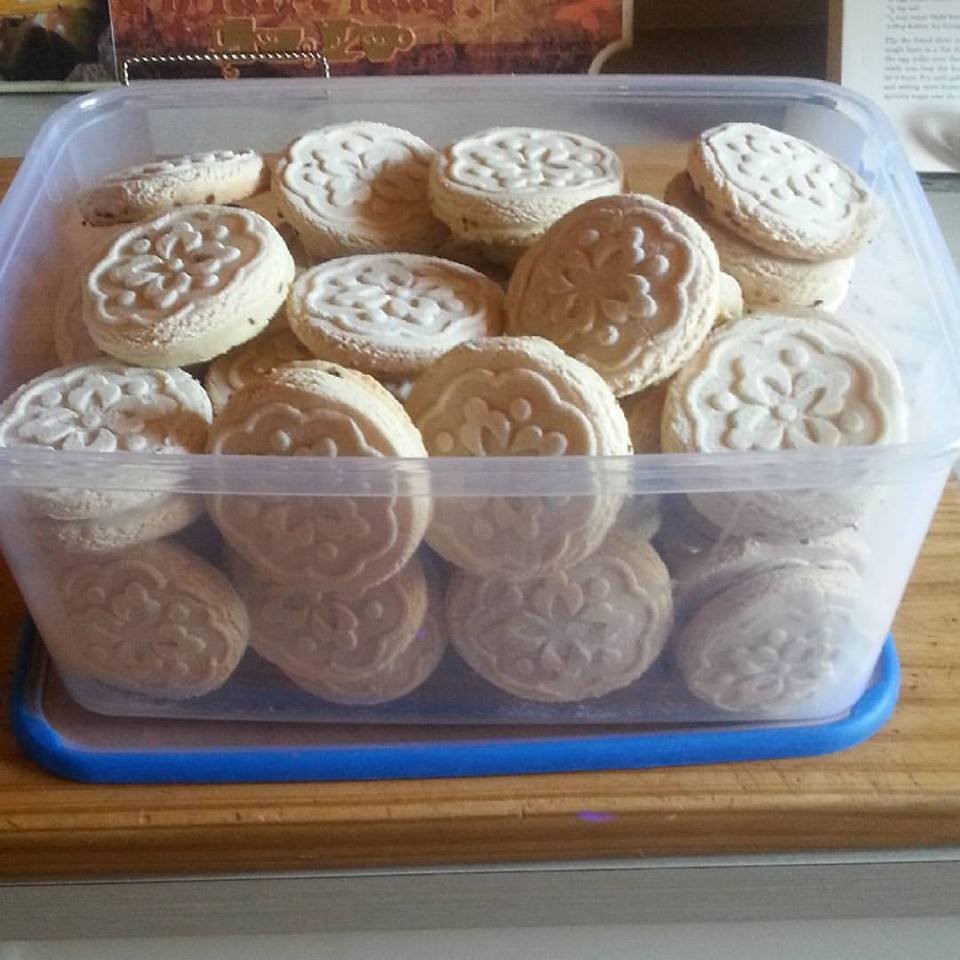 This recipe makes a fudge type candy. This is a sweet that can be set in a loaf and sliced like bread but I prefer is set it in little moulds, i.e. mini muffins tins lined with mini patty pan liners. I can get 2dozen mini muffin patty pan liners filled with a single batch.

This recipe can be played with to make different flavours; some of my favourites are rose, citrus and even chocolate. I also suggest using a proper candy making copper pot to make this in as your product will turn out better in the long run (although these are quite pricey). If this is not available then I suggest either stainless steel or enamel but never cast iron as it will destroy the candy.

Take hony and sugur cipre and clarifie it togydre, and boile it with esy fyre, and kepe it wel fro brennyng. And whan it hath yboiled a while, take up a drope [th]erof wi[th] [th]y fyngur and do itin a litel water, and like if it hong togydre; and take it fro the gyre and do [th]erto pynes the thriddendele & powdour gyngever, and stere it togyder til it bygynne to thik, and cast it on a wete table; lesh it and serve it forth with fryed mete, on flessh dayes or on fysshe dayes. 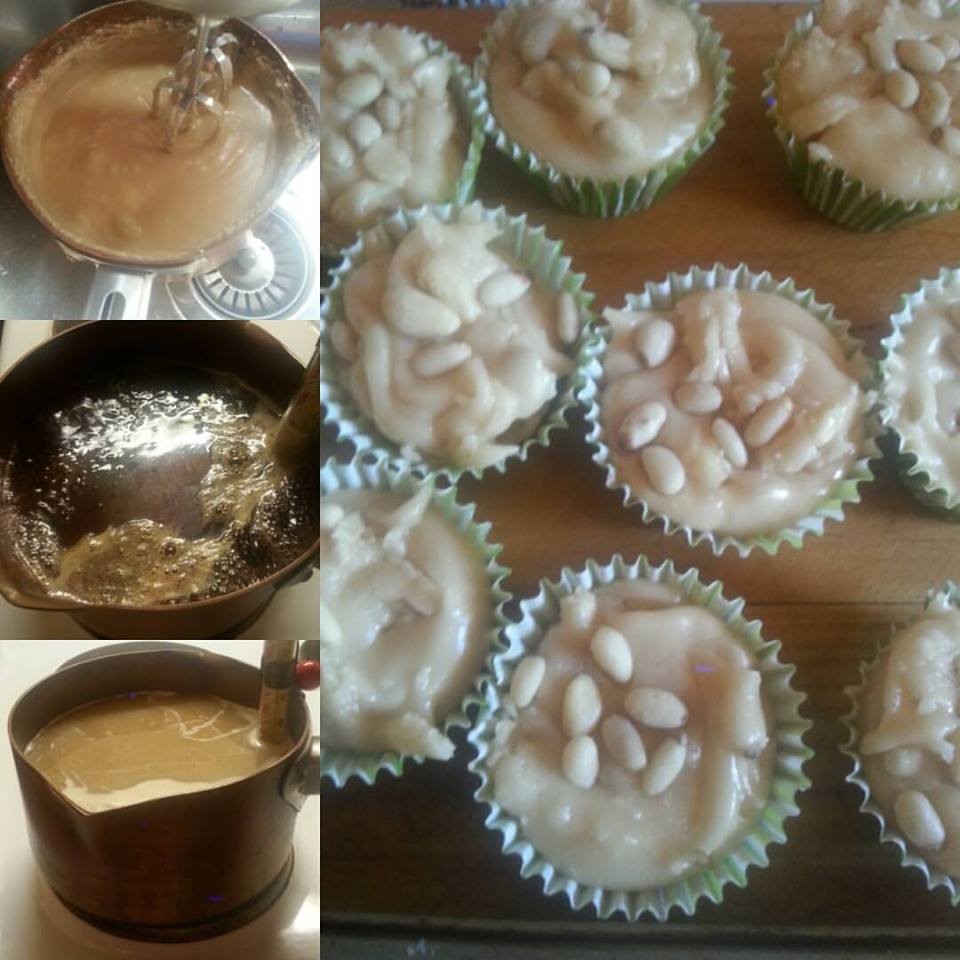 A handheld mixer with beater attachments

A mould of your choice

Heat the sugar, honey and water together, stirring frequently, over a medium to low heat. Brush down any sugar granules into the syrup with a wetted pastry brush til the sugar dissolves. Heat the syrup to 120 degrees (this is just over soft ball stage). Cool it a little by standing the pot in some cold water in a sink. Add the ginger and then beat with the hand held mixer til the mixture stiffens. Stir in the pine nuts near the end. This can then be warmed up again without affecting the structure of the candy (trust me I’ve done it heaps of times) and poured into moulds and sprinkled with the extra pine nuts (you will need to push them in a little). Push them in a little to ensure they don’t fall off. Let cool and enjoy!

An easy way to clean your cooking pot is to fill with water and boil on the stove til the sugar dissolves. Never wash a candy pot with detergent as will taint your candy.

Notes: I’ve modified the recipe a bit by doubling the quantity of ground ginger and also the method that Hieatt, Hosington & Butler suggest. All other directions and quantities are theirs.